In January 2007, Urdang moved into the beautiful landmark building, The Old Finsbury Town Hall, just down the road from Sadlers Wells Theatre.

Urdang spent two years restoring the building to its former glory, ensuring it met the needs of students and their training and allowing full disabled access.

In the heart of London, the Grade II* listed building is used for many West End musicals, dance and theatre companies and for TV productions, commercials, documentaries, fashion shoots and weddings. This gives the students an added value to their training – they see their chosen profession at work brushing shoulders with leading industry professionals as they go about their training.

On the intersection of six Finsbury streets, set in an island bound by Rosebery Avenue, Garnault Place and Rosoman Street, lies the town hall for the former borough of Finsbury. This outstanding example of late 19th century civic architecture provides a fitting monument to the proud inhabitants of this tiny borough on the edge of the city.

The completed Vestry Hall was opened in 1895 by Lord Rosebery barely a month after the completion of Rosebery Avenue, with a further extension built in 1901.

Throughout the early 20th century office space was rearranged to cope with increasing workloads. In 1928 a Special Town Hall Committee agreed a warehouse conversion on Rosebery Avenue to serve as an annexe to the main buildings, providing more office space.

The Town Hall provided a focal point for the municipal life in Finsbury. In 1929, for example the buildings housed the Town Clerk’s Department, the Borough Accountants, the Public Health and Borough Engineers departments. Additionally there would have been committee rooms, the Councillor’s rooms and the Mayor’s Parlour.

The first floor housed the Council Chamber and the public halls used for civic functions and public hire. Finsbury Council actively encouraged local residents to regard the Town Hall as their civic home resulting in a wide range of activities being held there for many years.

According to Nikolaus Pevsner, the famous architectural guide writer, Evans Vaughan’s design of the Town Hall’s brick and stonework is “free Flemish Renaissance” in style. There are Baroque influences seen in the female figures and carved frieze above the first floor at the Rosoman Street and Garnault Place junction. 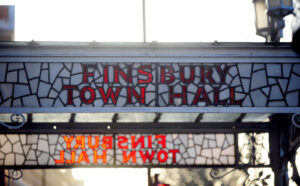 Many internal and external details are heavily influenced by the Art Nouveau – quite a radical statement considering when the Town Hall was built. The exterior glass and wrought iron canopy above the main entrance on Rosebery Avenue is one such Art Nouveau detail; the stained glass very reminiscent of the Tiffany lamps that were so popular in the early 20th century.

The public hall on the first floor has some elaborate Art Nouveau features, such as the winged figures lining the walls and holding the sprays of light bulbs.

We have 6 spacious dance studios, along with the iconic Great Hall and Council Chamber, providing both practical and inspiring spaces for auditions and training.